People who’ve already walked the Camino know that there’s one thing that should absolutely not be missed — Cruz de Ferro. Also known as the Iron Cross, it is set on a gently sloping hill that also happens to be the highest point of the Camino Frances.

The views offered from up top are incredible indeed, and the legends behind it are enough to spark the imagination of any history buff who’s looking for their next adventure. But most of all, the respectful peace of this spot is spiritually uplifting even for the non-religious, and travelers who long to see something unique that reflects much of the Camino spirit should definitely make a stop here. If you’ll be walking the Camino de Santiago soon, here’s what you can expect from Cruz de Ferro.

Located between Rabanal del Camino and Ponferrada, this cross is a bit of a mystery even for historians. Erected atop a five-meter wooden pole, most people believed that it was built for a very practical purpose — marking the way for pilgrims who walked the Camino Frances during the winter when everything is covered in a thick layer of snow. The landmark would rise high enough for anyone walking along the road to notice it and serve as a welcoming beacon that would guide the pilgrim to their destination. Whether this was its original purpose or not, most people today do use it to help them mark their way.

Some historians believe that it was a place used by the Celts even in pre-Christian times and that it was a part of an unknown ritual, while others believe that the ancient Romans used it to mark a border between two territories. Speculations abound, but the most popular belief is that the cross was put there by Apostle James himself. As the tale goes, St. James was passing through the land on one of his evangelical missions, when he encountered pagan priests who were performing a ritual that involved human sacrifice. Full of righteous anger, he grabbed a stone from his pocket and threw it at the pagan altar. Guided by the Lord, the stone shattered the altar into a thousand tiny pieces, and St. James erected a large cross in its place to mark the power of the Almighty.

Regardless of what the actual truth is, Cruz de Ferro is beautiful to behold and climbing to the top of the hill will allow you to take in your surroundings from a different perspective.

One of the best things about the Iron Cross is that it allows you to partake in a very old, freeing tradition. When you approach it, you’ll see that it’s surrounded by small rocks of all shapes and sizes and that most pilgrims who walk past tend to say a prayer and place a rock of their own near the cross. According to custom, if you bring a small piece of your own home town along with you, you may place it at the foot of the hill and symbolically “leave your burdens behind.” If you like, you may say a prayer and enjoy the profound peacefulness that envelops both hill and cross.

But regardless of whether you’re a Christian or not, the Iron Cross is worth a visit due to the simple fact that it’s a part of the history of the Camino and that it is shrouded in a lot of interesting mysteries. Visit it, take your time to enjoy it, and you’ll surely find the experience to be very soothing. 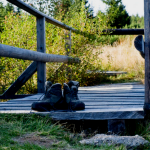 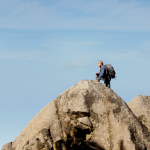