If you visit Galicia you will see countless people walking towards Santiago, often with backpacks and hikers attire. This route or routes have been walked since Middle Ages but pilgrim´s costume and accessories have changed a lot. In the middle ages no less than 4 Popes proscribed the pilgrim’s dress – a long cloak, broad hat, a staff and gourd, a pouch to hold alms and a scrip or satchel. The broad hats to protect them from the sun, the cloak to counter cold and rain, the satchel for food, the gourd for water and the staff for defence and support over rough ground. The scallop shell, which the pilgrims wore soon, became the symbol of the Jacobean pilgrimage. This was to identify them as pilgrims and not vagabonds. The less material belongings they carried the more severe their hardships.

The scallop shell has long been the symbol of the Camino de Santiago and it  has taken on mythical, metaphorical and practical meanings, even if its relevance may actually derive from the desire of pilgrims to take home a souvenir. It is seen very frequently along the trails , on posts and signs along the Camino and, even more commonly, on the pilgrims themselves. In fact wearing a shell denotes that one is a traveler on the Camino de Santiago.

But it  also served practical purposes for pilgrims on the Camino de Santiago as it was the right size for gathering water to drink or for eating out of as a makeshift bowl. As a metaphor, the  grooves in the shell, which come together at a single point, represent the various routes pilgrims traveled, eventually arriving at a single destination: the tomb of James in Santiago de Compostela

The cross of Santiago simulates a Latin cross and a sword with three lilies in her arms and grip. It may have originated in the time of the crusades, when knights wore small crosses with sharp bottom to nail them into the floor and perform their devotions. The sword represents the chivalrous character of St. James his way of martyrdom.

As for the gourd, its empty fruit served travelers to carry water in medieval times. It has been a basic equipment for every pilgrim for centuries. This is why eventually became a symbol of the Camino de Santiago and an inseparable image of the pilgrims who generally attached their pumpkin-flasks to their walking staff. And still do it in the present day.

Most of these symbols are present nowadays on the Camino de Santiago and they are without a doubt the most iconic and traditional souvenirs which help keep the past alive in the Camino.

Written by Anxo Saco, from CaminoTravelCenter.
Highly recommended by HOSTAL GAU TXORI: comfortable accommodation, traditional food and a wonderful natural landscape  as you pass by Zubiri. 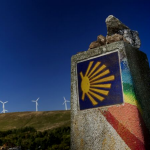 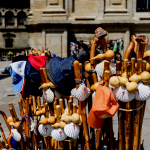